Later is an adverb, usually used in relation to time. It means for something to happen in the future. It isn’t define specifically, but just generally in the future.

Latter is an adjective. The latter happens or exists after something else; or toward the end of something.

I will explain you later. ( It means "nantar kadhitar").
Building of the new library should begin in the latter part of next year.("Dusrya varshyachya end part la")
Posted by ABKO English Academy, Pune at 02:36

Articles in English (Explained in Marathi) 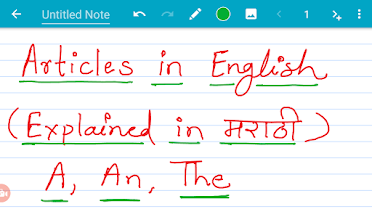 Learn articles in 10 mins in easiest and fastest way.